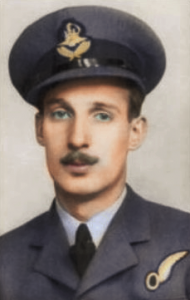 They were married on March 18, 1913 in Point Edward, Ontario. Father Arthur Edwin Parsons was a Civil and Stationary Engineer. Ted Parsons had two brothers; John and Thomas, and two sisters; Gwendolyn and Shirley.

Ted was a member of the SCITS rugby and basketball teams, was active in swimming and track, and his hobby was photography. According to his family members, Ted Parson developed quite a reputation as a “ladies man” during his youth.

Reference letters written by a couple of Timmins business people on behalf of Ted Parsons in his RCAF application included the following comments; “I have always found him honorable and trustworthy in every respect.

I would say that Mr. Parsons exemplifies our finer type Canadian Youth and I am sure that he would not be found lacking in any trust imposed with him,” and “I have found him to be a willing, honest and able worker at all times.

He has resided in Timmins for the past four years, and is well known here, and well-liked by business associates and personal acquaintances.” Twenty-four year old Arthur “Ted” Parsons joined the Royal Canadian Air Force on February 24, 1941 in Windsor, Ontario. Standing five feet seven inches, with blue eyes and brown hair, and single, he was residing at 1019 Pelissier Street, Windsor at the time (he recorded his permanent address as 286 Kathleen Avenue, Sarnia).

He recorded his next-of-kin as his mother Mrs. Olive Parsons, of 286 Kathleen Avenue, Sarnia. On his Attestation Paper, he also recorded that he had applied to join the RCAF in September 1940 in North Bay, the result being he transferred to Windsor.

He had already begun working on his flying license prior to enlisting, with 9 ½ hours of dual flying and 2 ½ hours of solo flying experience. He requested flying duties with the RCAF, with a preference to be a pilot. From the Recruiting Centre in Windsor and #1 Manning Depot in Toronto, Ted Parsons would receive his air training at #5 Service Flying Training School (SFTS) in Brantford, #1 Initial Training School (ITS) in Toronto, #12 Elementary Flying Training School (EFTS) in Goderich, Composite Training School (KTS) in Trenton, #7 Air Observer School (AOS) in Portage la Prairie, #3 Bombing and Gunnery School (B&GS) in MacDonald, Manitoba and #1 Air Navigation School (ANS) in Rivers, Manitoba. 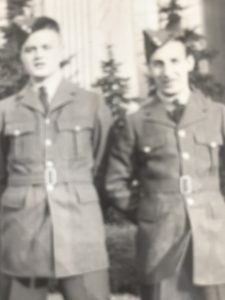 The Chief Instructor and Commanding Officer at #1 ANS remarks on Ted Parson was that he was, “Above average student. Conscientious worker, excellent navigator. Good appearance and personality,” and “Excellent officer material – would make a good instructor.” Just over one year after joining the Air Force, Ted would lose his father Arthur Edwin Parsons, who died March 8, 1942. Ted was training at #3 B&GS in Manitoba at the time, and was given a 15-day leave to return home. On April 11, 1942, Ted Parsons was awarded his Air Observer’s Badge at #3B&GS, and one month later, on May 11, 1942, Ted Parsons would receive his commission as Pilot Officer at #1 ANS in Rivers, Manitoba. 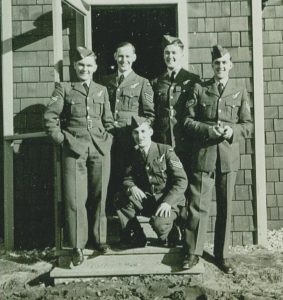 Ted would then spend his two-week pre-embarkation furlough with his widowed mother Olive in Sarnia. By July 1942, he would be posted east, to #31 Operational Training Unit (OTU) in Debert, Nova Scotia and then #31 Personnel Depot (PD) in Moncton, New Brunswick.

F/O-Navigator Arthur Edward Parsons On July 20, 1942, Ted Parsons would embark overseas, disembarking in the United Kingdom ten days later. Initially posted to #3 Personnel Reception Centre, he was transferred to #9 (Observer) Advanced Flying Unit (AFU), then to #14 Operational Training Unit (OTU) on August 8, 1942. On February 6, 1943, Ted Parsons became a member of RCAF # 77 Squadron. In March of 1943, his mother Olive Parsons in Sarnia would receive news that her son Arthur Parsons had been promoted to Flying Officer from Pilot Officer by the R.C.A.F. somewhere in England. 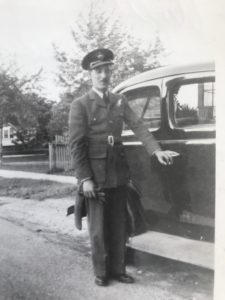 As a member of RCAF #77 Squadron “Esse Potius Quam Videri” (To be, rather than to seem), Ted Parsons would attain the rank Flying Officer-Navigator. Ted Parsons would serve with #77 Squadron for less than three months. On the night of April 30/May 1, 1943, Ted Parsons was a member of the crew aboard Halifax II aircraft JB803 that took off on an operational sortie targeting Essen, Germany. Nothing was heard from the aircraft after takeoff, and it was reported missing.

Later, Ted Parsons would be officially listed as, Previously reported missing after air operations, now for official purposes, presumed dead. In August 1945, widowed mother Olive Parsons, then residing on Vidal Street, would receive a War Service Gratuity of $317.79 for the loss of her son Arthur “Ted” Edward Parsons. In the spring of 1946, the RAF Missing Research and Enquiry Unit (MREU), conducted an investigation into the crash of Halifax JB803, and the burial of its’ crew. Following are portions of the Investigating Officers report; 2. …

I called at the Town Hall at Muiden on March 7th, 1946, and interviewed the burgomaster, a Mr. Koops a very helpful man. Mr. Koops told us he remembered the crash. No one of the police had been allowed near it. It occurred at 0230 hrs. on the morning of May 1st, 1943, in Polderland near the IJsselmeer (Zuider Zee). The aircraft burnt furiously for several hours, but there was no explosion.

The burgomaster stated that all remains of the aircraft were taken away by the Germans. 3. The bodies of Sgt. Scraff and Sgt. Watson were found near the aircraft. A doctor who visited the aircraft after it had burned out stated that he could not find the remains of any more bodies in the wreck.

A couple of days later the body of F/O Parsons was washed ashore from the Ijsselmeer at Muiden and the bodies of Sgts. Crawford, Shepherd and Hannam were washed ashore at Diemen, about 3 miles westwards. 4. The burgomaster had not heard of a seventh body, that of Sgt. Louth, being found.

It is possible that he baled out, as apparently the other members of the crew did, and that he came down in the Ijsselmeer and has either never been discovered or was washed ashore some considerable time afterwards, having no remaining means of identification. … 7.

Further efforts will be made to discover the fate and burial place of Sgt. Louth….. In July 1946, Olive Parsons, then residing at 263 North Vidal Street, Sarnia, would receive the following letter from the R.C.A.F. Casualty Officer, for Chief of the Air Staff in Ottawa; Dear Mrs. Parsons: A report has now been received from a Missing Research and Enquiry Unit on the Continent which contains additional information concerning the death and place of burial of your son, Flying Officer Arthur Edward Parsons, of which, although it is of a distressing nature, it is felt you would wish to be advised.

According to local inhabitants who were interrogated by a representative from the Missing Research and Enquiry Unit, the aircraft of which your son was a member of the crew crashed at approximately 2:30 A.M. on May 1st, 1943, near the Ijsselmeer, (Zuider Zee) near Muiden, 6 ½ miles East South East of Amsterdam, Holland. The bodies of Flight Sergeant Scarff and Sergeant Watson were recovered near the wrecked aircraft and the body of your son was recovered from the Ijsselmeer at Muiden. The bodies of Sergeant Crawford, Sergeant Shepherd and Sergeant Hannam were also recovered from the sea about three miles distant, at Diemen.

The six members of the crew were buried by the German Authorities in the General Cemetery at Muiden, Holland, and your son was buried in Grave No. 85, Row 1, rather than Grave No. 80 as previously advised. The reverent care of the burial places of all who served in the Forces of the British Empire is the task of the Imperial War Graves Commission. Already eminent architects are at work planning the construction of beautiful cemeteries and each individual grave will be supported and sustained by the nations of the Empire.

I hope it may be of some consolation to you to know that your gallant son’s grave is in sacred care and keeping.

May I again offer you and the members of your family my deepest sympathy in your great loss. In March 1947, Olive Parsons would receive the following letter from the Wing Commander for Chief of the Air Staff in Ottawa; Dear Mrs. Parsons: It is a privilege to have the opportunity of sending you the Operational Wings and Certificate in recognition of the gallant services rendered by your son, Flying Officer A.E. Parsons.

I realize there is little which may be said or done to lessen your sorrow, but it is my hope that these “Wings”, indicative of operations against the enemy, will be a treasured memento of a young life offered on the altar of freedom in defence of his Home and Country. Twenty-seven year old Arthur Ted Parsons is buried in Muiden General Cemetery, Netherlands, Row E, Grave 85. On Arthur Parson’s headstone are inscribed the words, GOD’S GREATEST GIFT, REMEMBRANCE.